Where In the World is Okra? 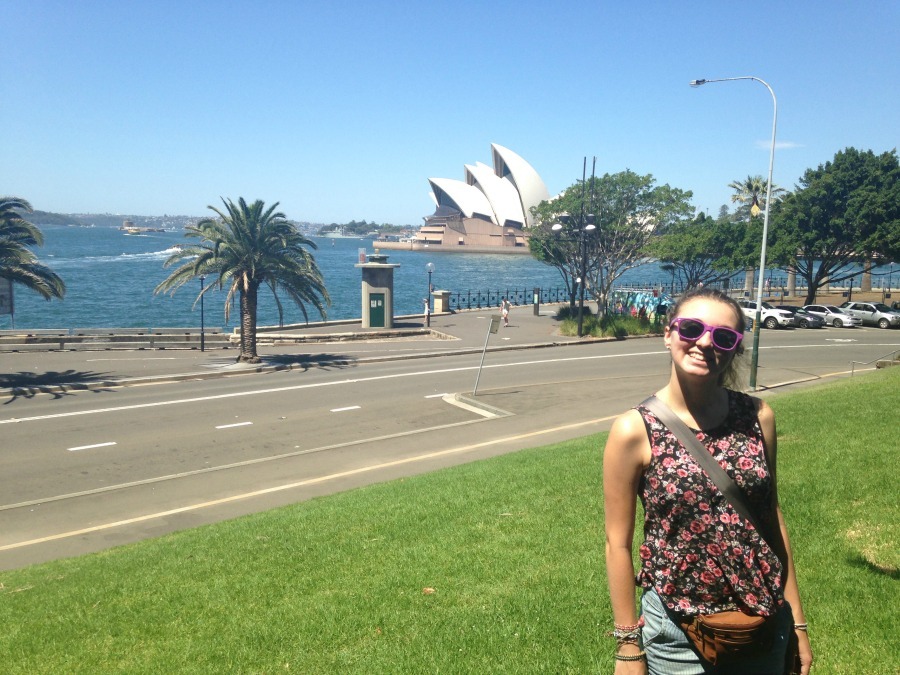 I’ve been spending the last few months in the sunny country of Australia.  As everyone back home in Canada got buried in snow and bundled up, I shed my winter coat and replaced it for sandals and sunscreen.  I’ve been living in a small town named Bulli in New South Wales, little over an hour from Sydney.  I’m a live-in nanny for a family here, or an “au pair,” and have been using my experience at camp to learn from and with the kids here.  So far their favourite camp song is The Llama song!  They treat me like family here and though they love to laugh at the way I say compost, I love spending time with them, going to the beach, going to their circus classes and just trying to get each other to say words the way the other would. The community of au pairs here is plentiful, and I found a friend in an American girl a few houses up the road from me.  Together we’ve been able to compare Australia to North America and to see parts of the area together, our biggest discovery so far are Tim Tams, which are a type of cookies that are basically the best kind, and the fact that they toast banana bread.  I’ve met a lot of nice people here, but also found a lot of different terms for different objects and activities.  When they have a barbeque night they would call it a sausage sizzle, cantaloupe they would call rock melon, instead of afternoon they would say “arvo,” and those are just the words they say, don’t even get me started on Vegemite or Wheet Bix, (which are foods that every family has!)  Even the beach has been a confusing ride, the first time they told me to “grab my cossies,” they had to explain to me that it was a bathing suit! 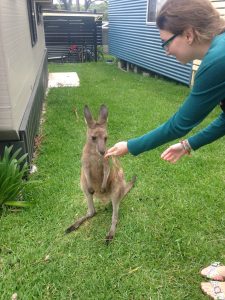 Driving on the other side of the road is a little off setting as well, the first couple of times I drove, I got into the passenger side before realizing the wheel was on the other side, but two months later and I’ll probably do the same thing when I get home.   The great thing about Australia is that everyone is so laid back.  Back home you can go to a Walmart and get everything you need, but here there are less large business and more local stores, especially in small towns.  Of course there are still the large grocery stores, but instead of having 20 to choose from, there are three.  It just seems to me that everyone is calmer here, doors are always open for people to stop by, the beach can be a half hour event instead of a full day excursion, and there is no need to wear shoes.  You can walk downtown, or into any store and restaurant without shoes and it isn’t an issue!  Whenever ever something a little bad happens, instead of stressing out they just say “no dramas,” and move on.  People talk to each other a lot here, having a long conversation in the grocery store or on the street or on the beach with a stranger is common!  There is nothing like the people living on the coast, laid back and kind seems to be the norm.

Sydney is even more beautiful than they say, with the Opera House and the Sydney Harbour Bridge, and on a Sunday afternoon hardly anyone is out other than market goers and people taking a stroll.  Having a picnic overlooking the Opera House in the grass, or taking a ferry across the harbour are just a few of the wonderful things to do in the city.  It’s hard to explain everything, and no matter how much I try I could never describe the delicious smell from the streets of The Rocks, just down a ways from the Harbour Bridge, I’m not sure what it was but whatever they were cooking was fantastic.

The beaches here are also stunning, with water so clear and people surfing on even the rainy days.  I’ve yet to be at the beach without seeing at least one person surfing, and in the early morning just as the sun’s coming up, there are always at least 5 people, starting off their day surfing in the water.  The nature here is so diverse, going from a rainforest with Mango and Banana trees on one side to the beach on the other, going outside I can breathe in the wonders of God’s creation every minute.  Living in the Illawarra region, provides an escarpment right outside the window, I’ve yet to hike it, but it’s on my list of things to do here.  With such great outdoors comes great animals, kookaburras are everywhere, laughing all the time, just like the song says.  The cockatoos are louder than roosters in the morning and evenings, you’d be surprised how crazy a sound those beautiful birds can make.  The Magpies living on this street tend to come and wander into the house on a daily basis, as if it’s their home too.  Kangaroos aren’t common in the city areas but down the coast at the family’s caravan park they roam around everywhere and I managed to touch one!  I’ve also seen Blue Bottles and poisonous spiders but that’s expected here, you can’t go to Australia without some sort of scary creature!

Though it gets hard being so far away from home, and 16 hours ahead of everyone I know, I would never give back this opportunity.  This family will forever remain as an extended version of my own, and the friends that I’ve met here will probably always be good friends, because there is no bonding experience like exploring the world together, especially when you both come alone.  I’m not sure where I’ll go when my time with the family runs out and I’m set to explore the East Coast.  No amount of time will ever allow me to see everything here, but I know I’ll meet new people on that adventure and see some great things when I set out on my own.  And I’m sure, even though the travel time is over 24 hours, I’ll be back again some day, to see more of this beautiful country.  Being away made me realize how much I love Canada too, and how much of that I still need to see and experience.  I hope everyone is doing well, and I’ll see you all back at camp again when the season starts, maybe I’ll accidentally let slip an Aussie word or eat “chip sangers,” the way they would!