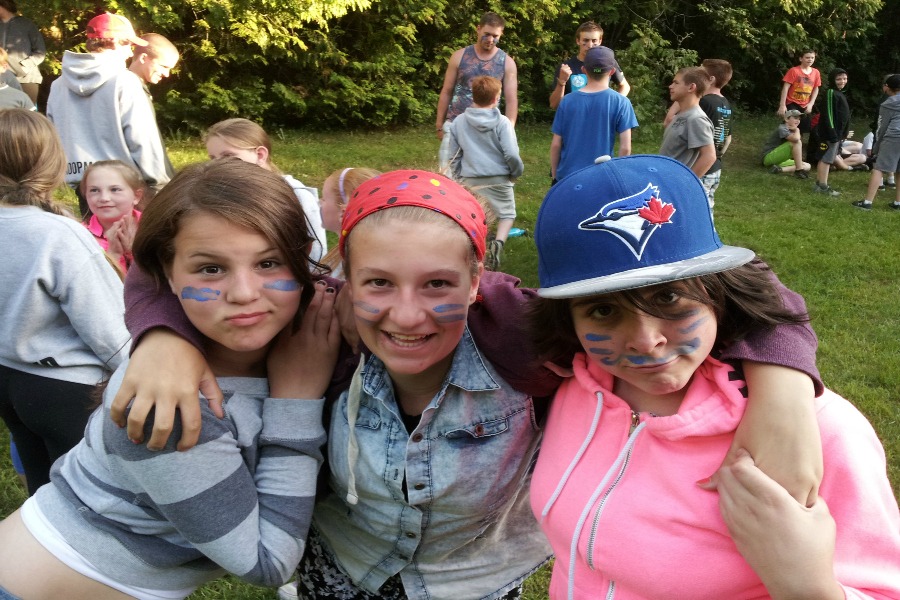 As a dramatic individual, I’m a big fan of creating stories to surround games. The classic One Word Stories activity (where a story is created one word at a time) was another favourite amongst campers, but was introduced in a new and exciting way. Campers arrived at their session to meet Mrs. Faye, a CEO of Finch industries. Mrs. Faye was quick to explain why each “writer” had been called to the emergency meeting : Finch industries wasn’t writing any selling stories, and was going to go out of business.

I had fun in my role as Mrs Faye, but even more fun watching campers so rapidly immerse themselves in the scenario and their own creative characters. Many a story was written by many a group, and I’m happy to say that Finch industries was not only saved, but offered a contract with a movie producer to turn their stories into films. You’ll have to ask the shining stars of each production for a preview, but as for the stories, they are as follows:

Oz Meets Asia
Green monkeys flew into a cactus. Then martians invaded the planet sushi. Then a marshmallow roasted for my mommy. Then the martians exploded sushi everywhere. Then, after they exploded planet sushi, chocolate zombies went and ate Mcdonalds at the side of the highway. THE END

Sophia’s Adventure
Once upon a time, there was a girl named sophia. She had a crown that was shiney as a star. The girl was magic, and could cook anything. Then she went on an adventure to wonderland.

She rode the leviathan and almost died, but Stanley saved her. He caught her and woke her up. THE END

The People Versus The Penguins

The Man On Mars

Once upon a time there was someone who went to mars in a tube. When he was at mars, he started to walk slowly because he was tired. He also was at the space station. The man said “look at that ginormous martian”. He loved space and puppies. ” Look at that ginormous asteroid, oh my gosh! ” said the man. ” It is lovely, but there are people on it. We need a rocket ship because we are stranded”. The asteroid destroyed the puppy’s toys. The puppies were sad… they started to cry. Then, the man decided to scream for toys. Then he started to search some rock for stone toys. He also checked the ground for toys. Then he found a toy for the puppies! The people started to turn radioactive and go flying like superman. They went back to earth. THE END

The Century Of Jeffery

Once upon a century, the was a gopher named jerffery. Jeffery ate a banana, and he peeled another banana. The bananas were mushy and purple. Then, jefferry fell in a bathtub. There were some bananas that made him turn around and slip. Jefferry had a terrible concusion that was painful, and he slept on a bed. So, he didnt want bananas anymore. Also, jefferry couldnt jump over a hurdle of bananas. He slipped on more peels. Then he went around the banana hurdle and burnt his tail. ” ouch! My poor tail! ” then an owl magically fixed his tail. Now jefferry doesnt eat anything but peanuts because they’re fun. Jeffery fixed his head by meditating with a banana. THE END

Once upon a time there was a hippo named Fredrick. He liked strawberries, and he LOVED pizza, but he was diabetic and so he went to Australia to be a pickle seller. Later, he quit his job to eat some trees, thinking that it would make him healthier. He remembered that trees made him sick. He took leaves and made a medicine. Fredrick ate the leaves with a stew. During the

night, fredrick noticed dots on his fingernails. He went to the doctor, and the doctor said ” You are a RHINO that needs to eat corn to get better”. Fredrick said ” Im allergic to corn. The rhino never ate the corn because he hated the smell, but never realized that the corn would make him better. So, he suffered the symptoms of eating trees. THE END

Sun Safe
Once upon a time there was a hippo that had a hula hoop. Nelly bought sunscreen with SPF60. She was very excited. Then she went to the forest to catch fireflies. After Nelly, the hippo, went to catch apples for Thanksgiving. She asked Theo, the giraffe if she wanted apples. Suddenly, Nelly changed her mind. She took the apples and put them in the basket. Theo was very angry. She threw the fireflies at Nelly. Then they got in a fight and they dropped the basket of apples. Then they realized that they wouldnt be baking apple pie. Theo apologized to Nelly for throwing the fireflies, and Nelly apologized to her for taking the apples. Then, Debbie the squirrel came and accussed both of them of not inviting a friend to the thanksgiving with free food. They put on a lot of sunscreen because Debbie invited them to go to the beach, and they hula hooped all together. THE END.

Once upon a time was long ago, where beasts lived. Also , the batman rescued a beast princess fro, a graveyard that was made up on the marshmallows where jellybeans grow. In Germany, batman ate salad. The Princess was a pig. She almost died, but then she found an old man running from Russia because the police tried and failed to eat the beast princess. Next, the beast ran from the police and they devoured the crown. THE END.

MEERKAT HEARS A WHO

One upon a time there was a boy named Meerkat. He was weird looking and very smart. Meerkat lived in a cabin at camp kintail. One day, a strange happening arrived at caml Kintail… it was a boulder named Hippie. Hippie was round, and he wasnt quite big. The tree died because men had plans about destroying the forest. However, the men had to go away. Then a duck alerted meerkat of the men and the tree. Meerkat was distressed. He destroyed the tools

that almost destroyed the forest. Hippie was happy because God was his friend. Meerkat’s cabin was giant, so Hippie could fit inside with all of his friends and the trees. THE END.

The results ranged from day to day, cabin to cabin, and session to session. Sometimes products turned out so ridiculous that laughter cause stitches in the sides of the audience; sometimes they were so impressive that absolute silence ensued. In any outcome, a wonderful product was found: fun.

One word stories are a great way of getting campers to be creative while having fun. To find a camp session for your camper this summer visit our rates and dates page or register for camp today.