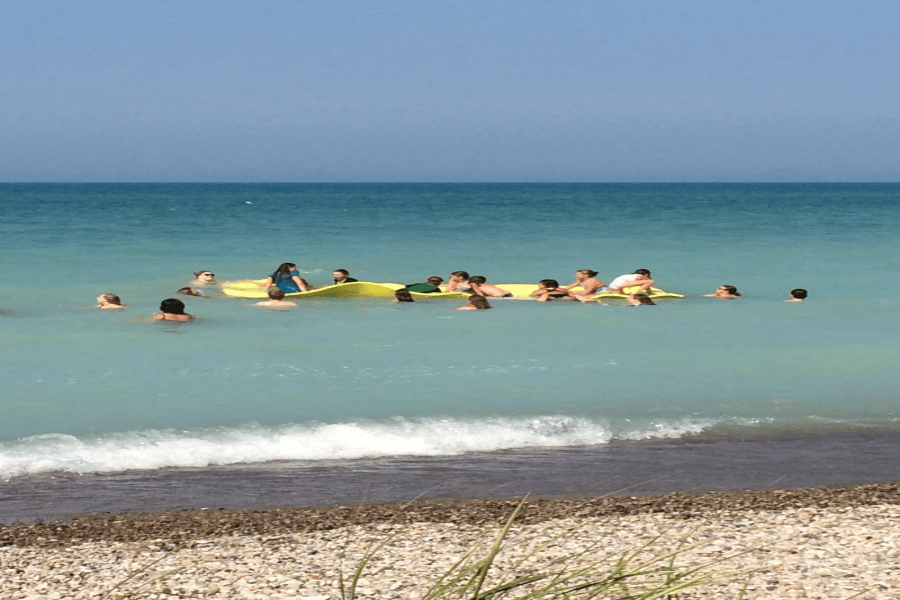 This spring the program staff went up to Camp Cairn for our annual OPCC (Ontario Presbyterian Camp Conference) and although the water was chilly we all went down and had an afternoon on the beach. With our new friends they showed us not only how differently their beach runs but also the most beautiful thing any beach-lover has ever seen; the Aquamat. For those who don’t know, an Aquamat is essentially a squished/rolled out pool noodle that is made out of thick foam so that it can hold about 15 kids at a time (depending on their size). It floats in the water and you can run and jump off of it, chicken fight on it, do cartwheels or even take a nap. We’re pretty convinced that the Cairn staff were a little confused as to why we were so in love with this piece of foam but that’s because we thought that one wouldn’t even be a possibility since Lake Huron is very different then their closed Echo lake.

After discussing it with Jonathon and Theresa, we finally got our new toy. It arrived from Toronto during our staff-training week in late June. I remember everyone’s excitement and confusion when Carbon and Johnathon brought it down to the beach while we were getting ready to practice our in-water emergency search. Of course we paused preparing for the search in order to let a few people test it out and from that moment on we knew that campers would have an absolute blast on it. We played on it a few more times during staff training but as K1 came nearer so did the true test. We brought it out and the kids LOVED it, no one was ever not smiling they tried all these cool tricks, jumping off and just hanging out. Throughout the rest of the summer as soon as kids saw the big yellow mat being carried out of the paddleshack they all changed their minds about kayaking and wanted to play on the aquamat.

The aquamat is also ridiculously perfect for decently wavy days. For example those days where it’s too wavy for any kind of boat but not wavy enough to have an awesome bodysurfing session, that is where the aquamat is our saving grace. It’s easy to run because all you need is one lifeguard to anchor it and staffs to help with that or even play on it with their campers. The only problems we’ve had with it after a very successful summer with it, is that animals snuck into the paddleshack and ate our instructions. Luckily, that was an easy fix with the help from the Internet! Whether you’re big or small, old or young I highly recommend that you come give it a try because after all even Jonathon’s tried it.